In Kiev unknown at high speed down the girl in “Zebra” 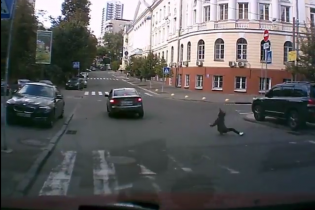 In Kiev unknown at high speed down the girl in “Zebra”

After the collision the driver did not stop.

In Kiev on the street kotsyubinskogo Michael, unknown knocked the girl in a crosswalk in broad day. The incident occurred today, September 30.

Video of the accident posted on the web. As you can see from the video, the driver was driving at high speed and did not stop after the collision with a pedestrian and drove on.

The girl, in turn, tried to rise, but could not. It immediately ran up passers-by.

See photos: the hem of a ridiculous car accident blocked the movement of trams

We will remind, in Kiev on the street Zhilyanskaya driver of the Chevrolet rammed an underground passage and fled the accident scene. According to the witness, before leaving, the driver put a broken car on the alarm.