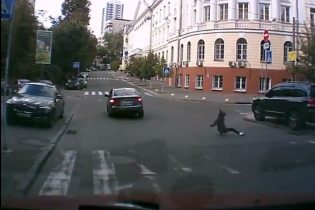 The threat to the lives of children can at any moment become a tragedy.

In the capital at the crosswalk, the driver touched a 9-year-old schoolgirl and fled the scene. Violator looking for the activists and the police, according to a story TSN.19:30.

The road crossing, which is used daily by pupils of elementary grades of the French Lyceum, is coming down the road and cars that are gaining speed, there’s often not even slow down. The transition is the path between the two buildings of the Lyceum. They say that only two years ago made by the traffic police decided to do a “Zebra”. About the traffic light speech was not even.

In Kiev on the pedestrian crossing, the driver hit the girl and did not stop

Violator looking for the activists and the police. Besides, it turned out that this shift in the way primary school children to the French school. And the drivers there routinely violate the traffic rules.

With the victim in an accident eve is already all right – she got off with bruises. However, people were shocked that the driver never even slowed down and just ran away from the scene. In social networks already distribute information about the make and number plate of the car of the offender. “It is a violation of the rules of road safety. For such an offence include a fine or up to three years of imprisonment”, – commented on the situation in the police.

To comment on the situation teachers without coordination with the Embassy of France can not. Telephone eve’s mum said that her daughter had taken home, but the school has not yet released. When the family recovers from the experience, it plans to ensure that the dangerous intersection was established at least a speed limiter.