The militants despite agreements return military forces in Petrovskoe 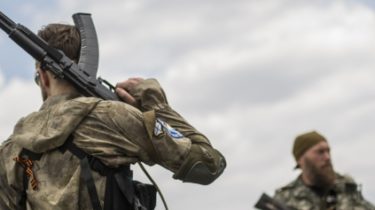 The militants despite agreements return military forces in Petrovskoe

The enemy forces returned to their positions.

The so-called terrorists “DNR” return your hand to the Petrovsky Donetsk region, where there supposed to be a disengagement.

About it reports the Russian news Agency “Interfax” with reference to “Deputy commander defense Ministry of DNR” Edward Basurin.

Read also: Donbas bred troops: the risks and danger that may wait for Ukraine in the Village of Lugansk

The leader of the militants claims that the Ukrainian security forces allegedly refused to withdraw their troops, so Dnrovtsy returned to their positions.

“The Ukrainian military refused to take units, once again thwarted the challenge. Our units go back to their previous positions,” Basurin said.

Earlier, the militants allegedly withdrew its forces from Petrovsky – 20 terrorists and two BMP.

Cheating or the beginning of the end of the war: Ukrainian soldiers are preparing for the delimitation of the troops in the Donbas

In the Village of Lugansk, a former hotbed of separatism, the Ukrainian military is that the hands are missing, but would not depart from the village. Following a new peace plan, will be mutual withdrawal of armed formations in the Village of Lugansk, Gold and Petrovsky. Here, the militants and the Ukrainian army should retreat from the front lines on the arm, and if the guns will be silent for 7 days straight.
The village Lugansk, gold, Petrovskoye, separation of forces, Donbass. ATO, the Minsk agreements