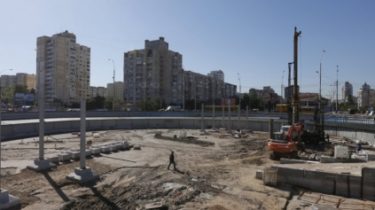 Mayor Klitchko promised to consider the views of residents.

Today, October 6, Kiev surrounded a session hall of the city Council and launched a picket at his door, according to TSN.12:00.

Half of the protesters – residents of the Obolon district, who are against the construction of shopping center above the metro station “Heroes of Dnepr”. People talk about the danger of collapse.

Their opponents – the same locals who believe that the emergence of such a center will help, as they say “bring clarity and order and clean natural traders”.

Deputies passed the results of public hearings. The mayor assured that the opinion will take into account, and the metro station are reinforcing. Opponents of the construction of the shopping centre, this statement surprised because the construction has begun.

“I want to emphasize again, that without the consent of the community nothing will not be constructed”, – says Klitschko.

Meanwhile, in the Network published photos of the cracks on the station “Heroes of Dnepr” and claim that this is fresh damage.

Half of the protesters – residents Obolon, who are against the construction of shopping center above the metro station Heroes of Dnepr. People talk about the danger of the collapse of the station. At the same time, another group of protesters claims: the emergence of such a centre will help to “restore the purity and order and clean natural traders”. The mayor was assured that public opinion will not build.