On Petrovka the stranger shot twice at a passer-by 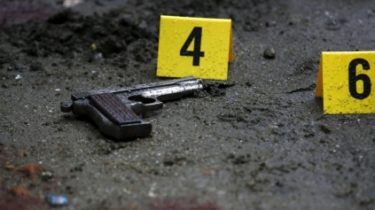 On Petrovka the stranger shot twice at a passer-by

The victim had this immediate dispute with the attacker.

In Kiev, near the metro station “Petrovka” the stranger shot twice in the 35-year-old man and fled in an unknown direction.

About it informs the press service of the Metropolitan law enforcement officers.

On a scene militiamen found the blood-stained man. On preliminary conclusions of physicians, he took two wounds to the chest. 35-year-old victim is under the supervision of doctors, his life, fortunately, threatens nothing.

Police learned that the victim was sudden conflict with a stranger. After a verbal altercation, the attacker shot him and fled.

Initiated criminal proceedings under part 1 of article 121 (Deliberate heavy injury) Criminal code of Ukraine. The sanction of article provides till eight years of imprisonment. Law enforcers are searching for the attacker.

We will remind that earlier in Kiev, police detained the room thief who while fleeing had shot at people.

In particular, local residents noticed two suspicious persons in the entrance, called the police and tried to detain them, one of the attackers began to shoot (pre – of the device for shooting rubber bullets – ed).

Two police officers of Department of protection of wounded. Later in the evening they heard shots in the street, rushed to help because he saw how three men beat a man. Tried to stop the attackers. But they opened fire on the police.