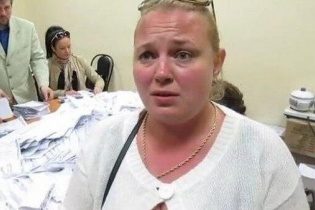 The speculator receives humanitarian aid and sends who knows where.

According to the actress, in 2014, the swindler has asked the “Fund Yana Poplavskaya” and offered assistance in sending aid convoys to Donbass. Tsipko introduced himself as the Deputy Director of “Charity Fund of the new Martyrs and Confessors of Christ” and provided the relevant documents, although in reality she had no relation to the Fund, and the documents were forged.

See also: “Soldier’s mother” from Kiev has “toured” as the inhabitant of Odessa in Moscow

Fund Poplavskaya passed through Tsipko children’s shoes, baby food and personal hygiene products, but have not received any reports about where to leave the goods. In response to claims of the Fund swindler threw a fit.

“This is her usual tactic: to ingratiate himself, to the goods or the funding to send the goods at their own discretion without the consent, send a few pictures from the hand and through the scandal, threats and blackmail to break off relations, “ban” your account,” writes Yana Poplavskaya.

The actress says that now, under the guise of her name and the Foundation of the new Martyrs and Confessors of Christ, Tsipko receives humanitarian supplies from various sponsors and organizations and sends them to who knows where. Poplavskaya suspects that part of the aid a con artist appropriates, as the goods never reached their intended recipients at 100 percent volume.

See photos: Ardent participant of Pro-Russian protests from a “soldier’s mother” turned into a “refugee from Donetsk”

Yana Poplavskaya also added that from October 2015 the Fund was not sent and has no plans to send humanitarian aid to Donbass.

We will remind, the native of Krivoy Rog Maria Tsipko began her political career during the Maidan. Then it seemed that the mother of a soldier of the internal troops, which beat the aggressive protesters, Kiev, perturbed by barricades in the city center.

Then the female from Odessa to cry about the atrocities of the Ukrainian army in Odessa, and still later was a refugee in Moscow, like working in a roadside café in Lugansk and was a member of the election Commission on a pseudo-referendum in the “DNR”. All of these roles adventuress has performed for Russian television, where it was shown in the news story if a real eyewitness.

Maria Tsipko, which is less than a year, changed up to a dozen roles, is now a Deputy Director of the Fund “Martyrs and Confessors of Christ.” Terrorist TV she presented the photo exhibition “Faith in Russia”.