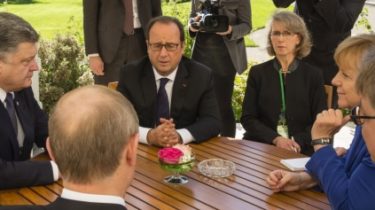 In Russia said that the meeting could take place on October 19.

A meeting of leaders “Norman format” could take place on October 19.

On this edition said the assistant of the President of Russia Vladimir Putin, Yuri Ushakov.

Steinmeier was declassified, when the meeting in the “Normandy format” on Donbass

France and Germany are working together to organize the meeting, “Norman Quartet” for peace in the Donbass. The President of France stated from the rostrum of the UN General Assembly. Speaking in new York, Hollande said, plans to meet with Poroshenko, Putin and Merkel in the coming weeks.