In Kiev, the women staged the “battle” chairs shopping-place, near the metro station 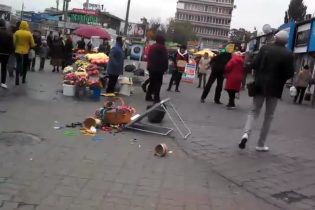 In Kiev, the women staged the “battle” chairs shopping-place, near the metro station

A fight captured on video.

In Kiev, near the metro station “Minsk” quarreled sellers natural market and staged a brawl in the street.

Video of the collision of two women published in the Facebook group “Obolon”. In comments to the video indicated that saleswomen are unable to divide among themselves the territory.

Read also: In Kiev, the guy swiped the controller, to drive free

One of the trays upside down. To find out the relationship women tried using chairs.

We will remind, in Kiev on the Khreshchatyk street in the middle of the roadway at rush hour fought two drivers. They tried to separate the other drivers and passers-by.