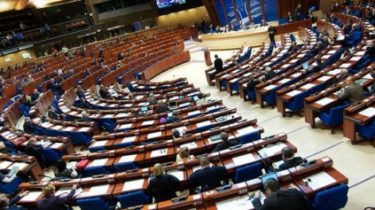 But the final decision about the beginning of the procedure is still pending.

Chairman of the Ukrainian delegation to PACE Vladimir Aryev has confirmed that his colleagues are discussing the possibility to initiate early retirement of the President of the Assembly, Pedro Agramunt, who lobbies for the lifting of sanctions with Russia.

About it writes “true European”.

Formally, the procedure has not started yet, but part of the Ukrainian delegation, according to the Aryans, configured to prepare a legal basis for this.

Head of the Ukrainian delegation added that the final decision about the beginning of the procedure is still pending and will depend on, Agramunt will continue to lobby for the lifting of sanctions against Russia.

In General, the Ukrainian delegation to the parliamentary Assembly of the Council of Europe is preparing ahead of time to question the powers of the President of the Assembly, Pedro Agramunt.

Read also: Ukraine may terminate its participation in PACE if there will be Russia

over time, Ukraine has stated that it will boycott its participation in the parliamentary Assembly of the Council of Europe, if recognized as powers of the Russian delegation in this organization, although in the elections to the state Duma on the territory of the occupied Crimea.

Sunday, October 9, it was reported that the PACE are going to accept the ultimatum of Russia.

However, later it became known that the Assembly does not, after all, according to an ultimatum, the organization needs to change the rules of their work.

Chairman of the Verkhovna Rada Andrew Parubiy in France gave the PACE President a protest note to the Ukrainian foreign Ministry regarding Russian election in the Crimea. As well as the appeal of the Ukrainian Parliament not to recognize the elections to the state Duma as the vote in the occupied territories undermines their legitimacy.