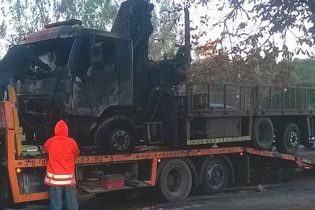 The owner of the tow truck over the last month and a half dismantled about 40 objects mobile Commerce.

Today, October 14, unknown persons doused with gasoline and burned the tow truck, which was engaged in the dismantling of illegal mobile coffee vans in the capital.

About this “Ukrainian truth. Kiev” said the MP, adviser to the mayor of Kiev on issues of improvement Dmitry Belotserkovets.

“Burned the tow truck contractor who won the tender for dismantling of mobile Commerce. Night came to the Parking lot contractor in a Forest, doused with gasoline, seen in the video, and set fire to” – he said.

It is noted that this contractor over the past 1.5 months dismantled in Kiev, about 40 objects mobile Commerce.

Now the contractor has informed the police about the arson.

“It is important that the culprits were found, because it is a serious crime. If the culprits are not found, then it will be travel chaos and disorder. During the construction of the legal state before the law all must be equal”, – said Belotserkovets.

We will remind, in Kiev near the metro station “Forest” the night was demolished Kiosks. To the place of profit the owners Mafov and worked special equipment and assorted debris.