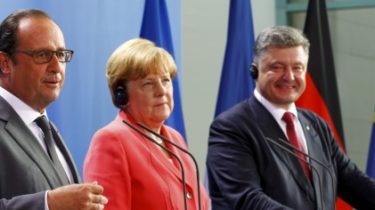 Politicians talk about the situation in the Donbass.

The President of Ukraine Petro Poroshenko during a telephone conversation with President of France Francois Hollande and Chancellor of Germany Angela Merkel agreed on a meeting of heads of state “channel format”.

It will take place on 19 October in Berlin. The leaders of the “Norman format” will be to urge the Russian Federation to carry out part of the Minsk agreements on security, the press service of the head of state.

During the conversation, the politicians discussed the situation in the Donbass.

“The President of Ukraine stressed the importance of a common position of Ukraine and countries of the European Union on the eve of the European Council Summit, which will take place on October 20-21, 2016 in Brussels, where will be discussed the strategy of relations with Russia”, – stated in the message text.

Reuters, citing a statement by the representative of the government of Germany wrote, which is confirmed by the participation of all four heads of States: Ukrainian President Petro Poroshenko, the head of France Francois Hollande, German Chancellor Angela Merkel and Russian President Vladimir Putin.