The Ukrainian foreign Ministry explained, where Russia makes a wrong decision about Sentsov and Kolchenko 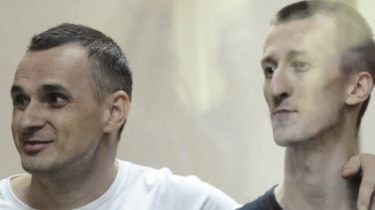 The Ukrainian foreign Ministry explained, where Russia makes a wrong decision about Sentsov and Kolchenko

Imposition of Russian citizenship to Ukrainians condemned is a gross violation of international law.

The Ministry of foreign Affairs of Ukraine has condemned Russia’s decision to refuse the transfer of Kiev convicted of Ukrainians Oleg Sentsov and Oleksandr Kolchenko due to the fact that they had allegedly obtained citizenship of the Russian Federation during the annexation of Crimea.

The office noted that in individual cases of Sentsov and Kolchenko have passports of citizens of Ukraine, as well as during court sessions they officially stated that they never requested and do not intend to address the Russian authorities with the aim of obtaining citizenship of the Russian Federation.

The foreign Ministry of Russia called the action a flagrant violation of the norms and principles of international law. Ministry of foreign Affairs said that citizens of Ukraine living in the occupied Crimea and who do not voluntarily filed a petition for obtaining Russian citizenship is solely the citizens of Ukraine and are unable to admit any citizens of the Russian Federation or persons with multiple nationality.

“The Ministry of foreign Affairs of Ukraine demands from the Russian side to stop the illegal actions forced the recognition of Oleg Sentsov and Alexander Colcano Russian citizens and to ensure their unconditional release and return to Ukraine,” the foreign Ministry said.

Recall that the Ukrainian film Director, screenwriter and Euromaidan activist Oleg Sentsov, Russian FSB detained in the night of 11 may 2014 in Simferopol and accused of preparing attacks in the Crimea, in particular, He is charged with the management of subversive and terrorist group “Right sector”, which allegedly made on 14 and 18 April 2014 arson of the headquarters of the “Russian community of Crimea” and “United Russia” in Simferopol, and also prepared in the Crimean capital of explosions near the Lenin monument and the Eternal flame.

Russia has denied Ukraine in the extradition of the Crimean people. This is a social network, the Deputy Minister of justice of Ukraine Sergey Petukhov. This response was received from the Ministry of justice. The main grounds for refusal referred to the fact that he is a citizen of the Russian Federation, although written Sentsov in the Crimea and did not recognize his Russian.