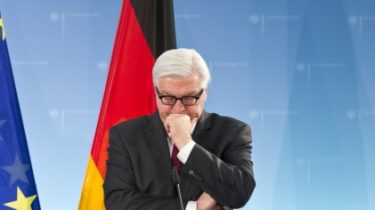 The Minister of foreign Affairs of Germany questioned the effectiveness of sanctions against Russia for its actions in Syria.

The Minister of foreign Affairs of Germany Frank-Walter Steinmeier opposed sanctions against Russia because of Aleppo.

He believes that the threat of the use of restrictive measures from the EU may adversely affect the course of negotiations on conflict settlement in Syria.

“I fear that a return to solutions that have been applied before in other conflicts, sanctions in the case of Syria will not help to prevent a humanitarian catastrophe, because the sanctions are too deferred action, to help open a humanitarian corridor” — said the Minister.

“On the contrary, they can close the window of opportunity for negotiations that we need,” he concluded.

See also: the US can completely destroy relations with Russia, if you impose new sanctions – foreign Ministry

We will remind, at the EU summit in Brussels on October 20 during the 9-hour meeting, the leaders of the EU decided not to impose sanctions against Russia because of Syria. Media reported that this decision was influenced by the Prime Minister of Italy Matteo Renzi. From the beginning Germany, France and Britain had intentions to support the decision to impose sanctions. And immediately opposed by Spain, Austria, Cyprus, Greece and Italy.

Angela Merkel has said that EU countries will think about sanctions against Russiaif the current intensity of air strikes in Aleppo, Syria will continue.

The EU decided not to impose new sanctions against Russia

The European Union will not impose additional sanctions against Russia because of its involvement in attacks on civilians in Syria. But after discussion at the EU summit in Brussels, the European-Russian relations, European politicians have warned Moscow that they would consider, if it continues bombing of Aleppo, and called for an immediate cessation of atrocities.