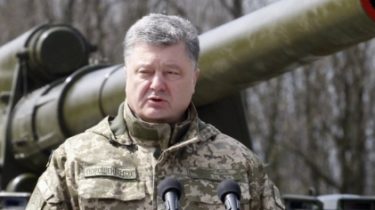 There is only aggression against an independent and sovereign Ukraine.

President of Ukraine Petro Poroshenko said that Ukraine has no anti-terrorist operation is only the fact of Russian aggression.

About it today, 27 October, said the President of Ukraine Petro Poroshenko during his speech at the conference on the occasion of the 440 anniversary of the Ostroh Academy, channel 5 reports.

“We have no ATO, we have the aggression of Russian Federation against a sovereign, independent state. When I was elected President, it is still very timidly said, and my key task was to recognize the world – the fact of aggression. It is not just satisfying our right to the truth, but it has the corresponding legal consequences. I can congratulate you, because the main aim of Russia was to demonstrate a situation where it is an internal conflict inside Ukraine, and “we are ready to mediate”. We didn’t let them do it,” he said.

According to the head of state, during his visit to Norway, in a joint international statement of the President of Ukraine and Prime Minister of Norway was named as a aggression of Russian Federation against Ukraine.

“After the well-coordinated work of our diplomats in resolut PACE clearly marked by the aggression of Russian Federation against Ukraine. Now during the consultations with the European Union, I am sure that we will spread the use of this term,” – said Poroshenko.

We will remind, the armed conflict in the territory of the Donetsk and Lugansk regions of Ukraine began in mid-April 2014, when armed groups of Pro-Russian activists began to seize administrative buildings and police stations in the cities of Donbass.

In response, 14 April 2014, the Ukrainian authorities announced the antiterrorist operation involving the Armed forces. Gradually, the confrontation escalated into a large-scale military conflict.

Note that except for the military, in the East of Ukraine against the Armed Forces of Ukraine are fighting more than 30,000 mercenaries and about 7,000 personnel of the Russian military.