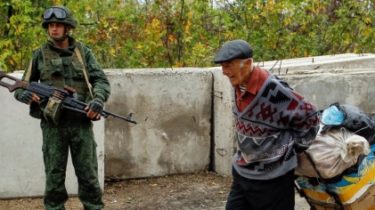 Vladislav Danego recalls the statement of the Ukrainian side.

The representative of the militants “LNR” in the Minsk talks Vladislav Danego said that raising parties in the village of the Luhansk can occur on 2 November.

According to Deinega, the possible date of the withdrawal of forces of the Ukrainian side said during a videoconference Saturday, October 29.

At the same time, no official comments about the Village the Ukrainian side is not allowed.

See also: Trilateral contact group and the militants have agreed to unscheduled meetings of the subgroups

About four hours lasted the meeting of the trilateral contact group in Minsk, traditionally behind closed doors, without the press. Profit all parties – Ukraine, Russia and OSCE. On the agenda – the results of the meeting “channel four”. In particular, the issue of elections in the Donbass, the return of control over the Ukrainian border and the introduction of police of the OSCE mission. One of the main ways out of this situation again is called breeding weapons.