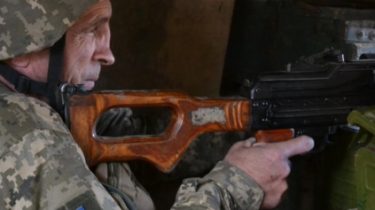 For the last day, October 30, in the area of ATO in the Donbas bogoevici 54 times opened fire on positions of Ukrainian military.

This is stated in the summary of the press center of staff ATO as at six Monday morning, October 31.

In the area of Mariupol in the Donbas had the most attacks-provocation – 31.

See also: Shot in the leg and returning to jail. Two stories sentenced to life, who fought for the “DNR”

In the region of Donetsk , there have been 18 attacks.

“In Zaitseve the enemy shelled positions of the ATO forces from grenade launchers and small arms in the districts of Luhansk and Novgorod – from APCS and machine guns of large caliber. The defenders Verhnetoretskogo and Trinity attacks lasted from 82-mm mortars, and in the town and the mine Butovka – of both calibers of mortars”, – stated in the message.

On Lugansk the directionand recorded five violations “regime of silence”.