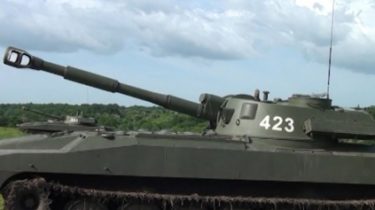 The military said that sometimes the enemy fires even during the day and disguise weapons.

The fighters continue to keep the tension of the defense line of the ATO forces in Mariupol direction. Their hand the enemy has concentrated in Sakhanki, Lenin and Dzerzhinsky, said in the story TSN.19:30.

The night the Russians and the separatists shelling Ukrainian positions with large-caliber weapons. Enemy self-propelled art rolled out to work in the area from Gotovogo and up to Shirokino, sometimes not even disguised. Marines at a position counted 25 shots – not including machine gun and grenade launcher.

On the front near the occupied Sahanki the military said that the shelling 122-m and 152-m caliber already become habitual to them. Shells plowed the ground, cutting down trees around the position. But leave it to the soldiers, despite the danger, don’t want to say that this is Ukrainian territory that they came to protect. So for your own safety every day deeper dig into the ground.

As previously reported, the Russians beat the Marines under Mariupol insidious shells-“moles”. The military said that the enemy fires a haphazard and chaotic series and single shots at various times to predict an attack was impossible.

Armored enemy worked at Shirokino and mortars were hitting the Water and Hnutove. Shoot the mercenaries from Sakhanka and Dzerzhinsky. Enemy self-propelled art was vacacionales to work on the site of Hnutove and Shyrokyne on the coast of Azov, sometimes even disguised.