The third world war may start in Latvia – Foreign Policy 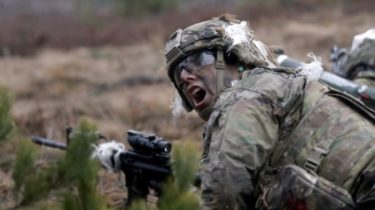 The third world war may start in Latvia – Foreign Policy

Putin will try to provoke ambiguous paramilitary crisis in the Baltic States.

“Four years ago I predicted Russia’s invasion of Ukraine,” writes Paul Miller in the article “the Third world war may start in Latvia“published on the website of the journal Foreign Policy.

Here is my next prediction that now seem obvious to many people: in the queue, the Baltic countries, they will be one of the first and biggest test for the newly elected President of Donald trump. But most likely it will not be a clear invasion.

The President of Russia Vladimir Putin has a clear goal and political-military strategy. But not all realists understand it. Some argue that it is guided by a rational, defensive purposes: the expansion of NATO seems to him a threat, and Russia reacts accordingly. The West has expanded its sphere of influence at the expense of Russia, and now Russia is taking revenge. That’s why, according to John Mearsheimer, “the crisis in Ukraine is the fault of the West.”

See also: Latvia has announced increased readiness of the army because of the actions of Russia

This is nonsense, as most academic tests. Putin is not governed by cold calculation and rational self-interest, because it does not make any one person. We are driven by our perception of selfishness, which is formed and defined our deeper assumptions and beliefs – that is, our ideology or religion.

NATO can increase the number of troops in Eastern Europe

Four battalions in Estonia, Latvia, Lithuania and Poland. And in fact a new intelligence. In Brussels today will meet the defense Ministers of NATO countries, their talks would last two days. The meeting must be momentous.

Putin believes that the Russian hegemony in the near abroad is necessary to Russia’s security, because of their perceptions of the Russian statehood and historical destiny. Putin (and perhaps even his inner circle) is not just nationalist. It seems that the Kremlin is driven by a peculiar form of Russian nationalism, which is intertwined with religion, destiny and Messianic. In this interpretation, Russia is the Keeper of Orthodoxy and a mission to protect and spread the faith.

Indeed, rational Russia would not see the threat the expansion of NATO and the European Union because of the liberal order, open and comprehensive, and he really would have reinforced security and contributed to the prosperity of Russia. But Putin and other Russians who see the world through the prism of Russian religious nationalism, the West is inherently threatened due to its degeneracy and globalism.

From this point of view, NATO is not a guarantor of a liberal order in Europe, and hostile agent, the decadent West and the main obstacle to Russia’s greatness. Therefore, the political and military strategy of Putin requires the collapse of NATO. In particular, it needs to make meaningless guarantees of mutual security, provided for in Article V.

The invasion of Russia in Georgia and Ukraine there is the disputed territory of South Ossetia, Abkhazia and Crimea occupied by the Russian military. No country will never join NATO, being partially occupied by Russia.

Putin is now the most favorable international situation since the end of the cold war to continue Russian expansion. European unity is broken. Members of the Alliance questioned the value of the Pact on mutual security. And the new American President, it seems, sympathetic to Russia and is ready to justify her irresponsible behavior.

The next step is Putin more dangerous than the previous because it is likely to begin to move to the Baltic States that are NATO members. He will not be sent across international borders large formation in the uniform of Russian soldiers, because even the most cautious members of NATO will not ignore the apparent invasion.

Instead, Putin will try to provoke controversial militarized crisis with controversial puppets. Probably, it will happen within the next two years. Perhaps Russian-speaking Latvians or Estonians (a quarter of Latvians and Estonians ethnic Russians) begin to rebel, to assert their rights, and to assert that have been subjected to persecution, asking for “international protection”. Appear suspiciously well-armed and well-trained “people’s front for the liberation of the Russian Baltic States”. After several high-profile murders and bombing the Baltics will be on the edge of civil war. Can cause small riots.

Russia will block all resolutions of the Security Council of the United Nations, but will offer my services as a peacemaker. The Council will gather for a meeting. Poland will lead on the application of Article V, will announce the Russian attack on the Baltic countries, and organizes collective defence against aggression from Russia. The Germans and French would resist violently. All will be watching the United States to understand which path the leader of the Alliance.

Local Saeima adopted amendments to the criminal code that provide for severe punishment for anti-state activities. So, eight years behind bars now can be obtained for the encroachment on the territorial integrity or the sovereignty of the country.

If the Alliance will not apply Article V guarantee mutual security of NATO would become functionally meaningless. None of the members of the Alliance no longer believe that a Treaty can grant him immunity from Russia in the future. The geopolitical clock back to 1939. Some countries in Eastern Europe can go to Russia. Other, from Poland, will begin to arm themselves to the teeth. Dream about Putin split the West and open fields in Europe will become a reality.

But if the Alliance really will use Article V, it would be tantamount to declaring war on Russia. And then Trump will have to decide whether to protect Latvia to risk starting a Third world war.

Barbed wire stretched where Ludza region borders on the Pskov region. Fence height of more than two and a half meters and is equipped with cameras and motion sensors this year plan to equip 24 kilometers of the border. And then its length is 92 km.