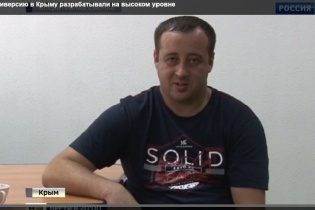 Kharkiv truck driver was detained in August along with Panov and Zatkhey.

The fourth detained for “Ukrainian saboteurs” in Crimea can be from Kharkov Vladimir Perisic.

It is reported by the Crimean human rights group.

The man showed the TV channel “Russia 1”. Introduced as a truck driver from Kharkov, allegedly recruited by the Ukrainian intelligence service in January this year and arrested in August along with a group of “saboteurs”.

Prisic on camera admits that he went to the Crimea and transferred to the Ukrainian intelligence information about Russian military equipment. One day, he was allegedly asked to smuggle illegal on the Peninsula of box size 60 by 60 by 30 centimeters.

See also: a Mixture of cynicism and stupidity. Turchynov sharply commented on the detention of “Ukrainian saboteurs” in the Crimea

Now with Vladimir Presidem, is unknown. Human rights activists believe that he may be in jail or Simferopol SIZO “Lefortovo” in Moscow. They also suggest that Kharkov could testify under torture or physical and psychological pressure with the violation of his right to protection.

Previously it was known about the three detainees in the case “Ukrainian saboteurs”. Evgeny Panov, Andrei Zatkhey and Redvan Suleymanov.

The recognition of a spy-saboteur: how Russia is looking for reasons to go to an open war in Ukraine

“The center for army, conversion and disarmament” warns: the risk of war will increase from 5 to 18 September. Around Ukraine has created several new groups, ready for offensive action. But after the Crimean incident open invasion did not happen. TSN has learned about a special operation of the FSB, which failed to stop: in the Russian special services almost happened with the creation and capture of a group of fake terrorists.

Recall, 10 August the Federal security service of the Russian Federation said about prevention in the occupied Crimea terrorist actsthat were allegedly prepared by the Main intelligence Department of the Ministry of defense of Ukraine.

According to FSB, in the night from 6th to 7th August 2016 in the town of Armyansk was discovered by a group of “saboteurs”, the detention of which killed the employee of FSB, and on the night of August 8, 2016, two more groups of “saboteurs” allegedly made attempts to break into Crimea, which “were covered by massive attack from the neighboring States and armored vehicles of the armed forces of Ukraine”. The FSB says that during the battle killed the Russian military.

In Russia said that the site of the first clashes were allegedly found 20 improvised explosive devices, ammunition, mines, grenades and special weapons. Also, the FSB announced the elimination of the “intelligence network” of the Ukrainian intelligence in the Crimea among citizens of Ukraine and Russia. One of the organizers of terrorist attacks called the inhabitant of the Zaporozhye region Yevgeny Panov, who served in the 37th separate infantry battalion of the armed forces under a call sign “Eugene”, was demobilized in August of last year. The brother of the detained Ukrainian claims that he was kidnapped on the territory of mainland Ukraine and were taken to the occupied territory.

See also: Factory of lies. The defense Ministry denied the statement of the FSB about “Ukrainian saboteurs”

It is worth noting that the court occupied Simferopol was taken into custody on two months of a resident of the annexed Crimea Andrei Sahaja. A man suspected of involvement in the preparation of sabotage and terrorist attacks on the Peninsula. Thus, the court satisfied the petition of the investigation

About 10 people passed on business as witnesses. At this point, the investigation examines how they relate to the so-called “sabotage.” The status of some of them can be suspects.

Russia has officially declared that is ready to take appropriate measures under National military doctrine. This is instantly announced to the media by Vice-speaker of the State Council of Crimea Remzi Ilyasov. First today on the website of the FSB Russia has published the statement in which has accused Ukraine like 6 and 8 August, the Russian security forces defused several Ukrainian subversive groups.