“The center is paralyzed.” People of complaining about traffic because of blocked Maidan 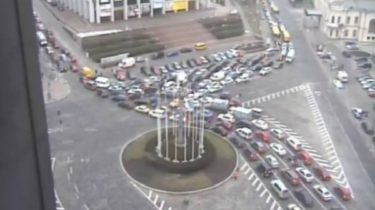 “The center is paralyzed.” People of complaining about traffic because of blocked Maidan

About changes to traffic authorities reported in advance.

Capital centre gridlocked due to the announced ceiling of the Independence square, Khreschatyk and adjacent streets, where today is the celebration Day of the revolution of dignity.

In particular, the tubes fixed in the European area, Vladimir, Tereschenkivska the streets and the Vladimir descent.

According to the service Yandex. Tube now the busy roads of the capital is 4 points.

In the European area, in addition, had a serious accident with victims: there are “fast” and rescuers of gschs.

Earlier it was reported that the Khreschatyk and adjacent streets blocked off from six in the morning. 10 am began the celebrations for the Day of the Revolution of dignity.