The Russian regime has killed democracy in the toilet – Poroshenko 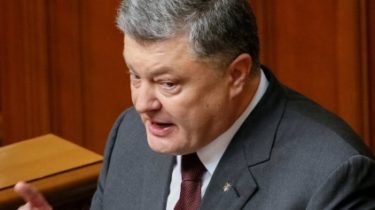 The Russian regime has killed democracy in the toilet – Poroshenko

The head of state recalled that Russia officially recognized as an aggressor.

President of Ukraine Petro Poroshenko during his speech on the occasion of the anniversary of the revolution of Dignity called the Russian authoritarian regime and declared that the Kremlin has its own “Trojan horses” in Europe.

The Ukrainian leader paraphrased the Russian leader Vladimir Putin, who in 1999 promised “to wet terrorists in a toilet”.

“Russian authoritarian regime, which has killed democracy in the toilet in their own country, is willing to use its tools for their own purposes outside of the Russian Federation”, – quotes “Ukrainian truth” quote Poroshenko.

He noted that the Kremlin has its own “Trojan horses” in Europe, supporting the radicals in different countries.

Also Poroshenko stressed that the Russian Federation in official documents recognized the aggressor and occupier.

“For the first time in official documents of the UN, called Russia what it is actually – the invader state, and Crimea and Sevastopol as temporarily occupied territories. And previously, PACE adopted a document in which the situation in the East is characterized as Russian aggression against a sovereign state”, – he explained.