The trial of Ephraim: the judge and the lawyers differed in terms of the content of the former regions in custody 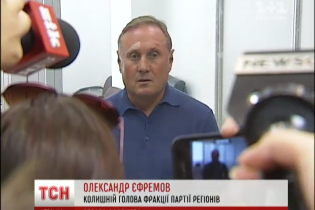 The trial of Ephraim: the judge and the lawyers differed in terms of the content of the former regions in custody

Today the suspect can be released from custody.

Today, November 24, the Pechersky court of Kiev continued consideration of a preventive measure former head of the faction “Party of regions” Alexander Efremov.

As the correspondent of TSN from the courtroom, lawyers demand the release of Ephraim from custody immediately, because I think the period of his detention expired at 7:28 am.

The judge denied a motion by lawyers, as another way to interpret the ruling of the Pechersk court. The court finds that the suspect is detained until 24 November, so the deadline is tonight at midnight. There is a high probability that the ex-the regional night released from custody.

Yefremov said that sit behind bars during the investigation should not, because calls video where he calls for the overthrow of the government, through its installation and can not believe it.

Ephraim is suspected of infringement of territorial integrity of Ukraine, financing of the terrorist “LPR” and embezzlement of funds of the enterprise “Luganskugol”.

In the Pechersk court the fate of former MP Alexander Efremov

The Pechersky court the second day is determined by elongation maryyy of restraint for the former head of the Party of regions Oleksandr Yefremov. The meeting, which began yesterday, continued until 3:00 in the morning. Continued today at 9:00.