Hand Luggage: Yanukovych called taken out from Mezhyhirya the value of personal belongings 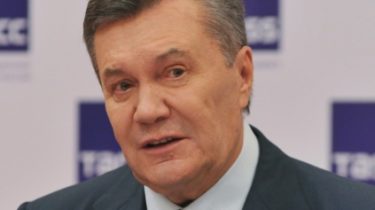 Hand Luggage: Yanukovych called taken out from Mezhyhirya the value of personal belongings

In any Bank in the world is not a penny of my money, said.

Stripped of the title of the Ukrainian President Viktor Yanukovych gave the answer to the question about the taken from Ukraine the money.

About it I there was a speech during its press-conference.

Taken the money he called “fabulous.”

“In any Bank in the world is not a dime of my money. I have not had any accounts in foreign banks,” – said Yanukovych. He assured that in Ukraine he has not taken anything except personal items.

Read also: Yanukovych for the first time confirmed the death of the youngest son

Earlier, Yanukovych called the cause of the separation of Donbass from Ukraine.

“I have said repeatedly my point of view. I was initially against, to violate the territorial integrity of Ukraine. The separation of Donbass from Ukraine – the emotional rush of people who reacted to the events in Kiev”, – said the fugitive.

In the Internet appeared the recording of surveillance cameras Mezhyhiria. There are fixed, as the President, his family and servants was packing at the time when the killed on the Maidan “Heavenly hundred”.