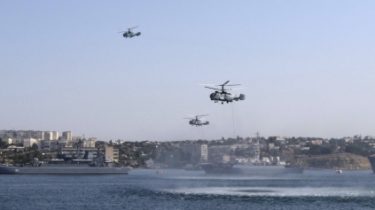 The flights are operated normally.

Closing the airspace over the occupied Crimea to fly due to Ukraine’s intention to conduct a missile firing at the beginning of December is not yet available.

About it the adviser said the head of the Federal air transport Agency (Rosaviatsia – ed) Sergey Izvolsky, writes TASS.

“The issue of the closure of airspace over Crimea had not even occurred, the flights are operated in a regular mode”, — said Izvolsky.

He even believes that Rosaviation will achieve from Ukraine cancel enter exclusion zones.

The Federal air transport Agency even believe that such actions of the Ukrainian side violates the requirements of a number of international acts and pose a danger to civil aviation.

We will add that in the Federal air transport Agency protested that the publication aviation notification was not in conformity with the Russian Federation. Also, the Russians reported about a potential hazard to civil aviation, remembering MH17 in the Donbas. The Russian Ministry did not clarify that passenger liner Miloseski airlines was shot down Pro-Russian militants of a Buk missile system smuggled in from Russia.

“The Federal air transport Agency requires from the Ukrainian side the immediate withdrawal of the notification issued, considers inadmissible the attempts to establish closed areas in the “sovereign airspace of the Russian Federation” and insists on the absolute necessity of the preliminary coordination with the competent Russian authorities and air navigation service provider of action on the establishment of exclusion zones in the airspace over the high seas in “the area of responsibility of the Russian Federation”, – stated in the message.

The State aviation service plans to conduct missile fire were not reported.