In Kiev, a woman threw herself under a train 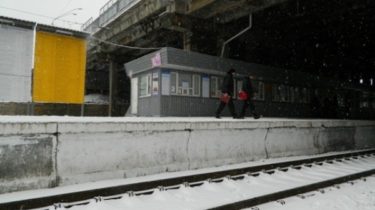 In Kiev, a woman threw herself under a train

The passenger tried to kill himself.

Yesterday, November 29, at the station “Svyatoshin” in Kiev, a woman threw herself under a train.

About it reports a press-service of the Moscow Department of the national police.

The incident resulted in the woman cut off his leg, now she is in the hospital.

See photo: In Kiev under a subway train has fallen man – movement on the red line stopped

Into place left it is investigatory-operative group which recorded the circumstances of the incident. With the help of seized records from surveillance cameras, investigators found that the 49-year-old woman jumped under a train.

Presently police establishes the circumstances of the incident and the reasons for a woman to take this step.

We will remind, earlier in the capital, the tragedy occurred on Kurenivsko-Chervonoarmiiska metro line. At the station “Petrovka” the passenger jumped under a train. As a result, she suffered injuries not compatible with life.