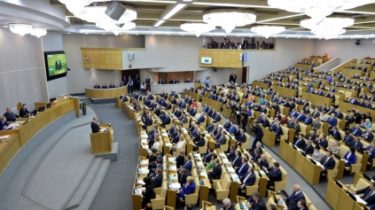 Russia interpreted the document as a “hostile act with all the consequences”, hinting at undermining the inviolability of borders of the countries.

In the Russian state Duma, which was not recognized as legitimate, called adopted by Ukraine and Poland, a Declaration of remembrance and solidarity provocation and manifestation of Russophobia.

“This decision by our fellow parliamentarians inspired by hostility not only to the former Soviet Union and the Russian Federation, became possible in conditions that extreme Russophobia, which, sadly, distinguishes current policy of Poland and Ukraine… This provocation not only do they cause irreparable damage to relations with Russia, but also undermine the inviolability of its borders”, – stated in the decree.

Also the Russian deputies condemned the act of the parliaments of Poland and Ukraine, saying that politicians in both countries trying to gloss over the problem of their relationship, demonstrating the desire to “make friends against a common enemy” and want to “retroactively rewrite history”.

“It is surprising the fact that the representatives of Poland, once again condemned the Molotov – Ribbentrop Pact concluded at a time when Nazi Germany’s attack on Poland was imminent, does not mention anything about the “Munich agreement” in 1938, one consequence of which was the participation of Poland in the partition of Czechoslovakia, neither of the earlier agreement of the Hitler – Pilsudski on January 26, 1934, unleashed, in fact, the Nazi regime hands for the first action – the annexation of the Saar and the remilitarization of the Rhineland,” – said in Russia, emphasizing what even more surprised them doubt the Ukrainian MPs of the importance of the role of the USSR in the Soviet Union, as well as in decision-making by the Soviet leadership.

“The state Duma said that Russia as a successor of the USSR, the state winner in the Second world war, will not allow a revision of its history and the verdict of the Nuremberg Tribunal, spreading all over “and” the question of the culprits of the outbreak of the bloodiest war in the history of mankind. The Russian Federation as a permanent member of the UN Security Council will not allow a revision of the postwar world order, one of the guarantors who she is,” said in the Duma.

Russian MPs called on the parliaments of the USA and the UK to join their position, warning that Russia will treat any attempt by the adoption of the Declaration by other countries and international organizations “as to the hostile actions against the Russian Federation with all the ensuing consequences for the relationship”.

We will remind, on October 20, the Verkhovna Rada of Ukraine adopted the joint with Poland, “Declaration of memory and solidarity”.

“We draw attention to the fact that the Molotov—Ribbentrop Pact of 23 August 1939, the prisoner of two totalitarian regimes – Communist Soviet Union and Nazi Germany, led to the explosion on 1 September of the Second world war caused by the aggression of Germany, which 17 Sep joined the Soviet Union. The consequence of those events was the occupation of Poland by Germany and the Soviet Union and mass repression against our peoples. Those events also led to the adoption in Yalta in 1945, the decisions that have begun a new phase of enslavement of all of Eastern and Central Europe that lasted a century” — the document says.

Also the Declaration States that the conduct of an aggressive foreign policy by Russia and the hybrid information war “are a threat to peace and security throughout Europe”.