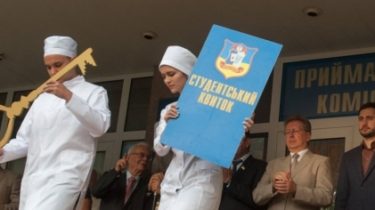 MES also presented the algorithm, which will be the transition from the current system of scholarship to a new.

It is expected that in 2017 will receive a scholarship not all students with “average” four and threes per session, and those that ranked high in the ranking, compiled by the universities.

“This is a completely new rating approach to determining scholarships, to be students. Namely, each institution will develop its own criteria for the ranking, will be approved by the academic Council of the University under the agreement with the student government of the University,” – said the Minister of education and science of Ukraine Liliya Hrynevych.

It is assumed that in the rating at 90% will be determined by academic grades, and 10% criteria, which will develop the University. This will help to determine the most successful students, even if the results of the session they all received the same average score.

Thus for higher educational institutions III-IV accreditation level minimum stipend will be at the level of 1100 UAH, which is by 33.4% more than last year. The best students will receive scholarships to 72,9% more than now – 1600 UAH, that is on the subsistence level.

See also: Salaries of teachers will grow by 50% and increased scholarships make it to the subsistence level – Grinevich

For more than 100% planned to increase the scholarship for best students for challenging professions, where it is difficult to obtain a high score. In particular, we are talking about natural Sciences and pedagogy (for teachers of chemistry, physics, biology and the like) and other mathematical, scientific and engineering specialties. For them, scholarship in the universities of III-IV level of accreditation will be 2036 UAH, in universities I-II levels of accreditation – 1536 UAH.

See also: Groisman assured that scholarships will not be canceled

The Ministry of Finance now agrees to the reallocation of costs with social scholarships for the academic in the amount of UAH 1.4 billion, and before you talk about redistribution in the volume of 1.7 billion, we need to see the calculations.

The Ministry of social policy will provide suggestions regarding the payment of social scholarships to certain categories of citizens.

MES also presented the algorithm, which will be the transition from the current system of scholarship to a new.

We will remind that the President of Ukraine Petro Poroshenko said that he would not sign the law on the State budget by 2017, which would include the abolition of payment of scholarships.

He said this during his speech annual message to the Verkhovna Rada.

Next year scholarships and teachers ‘ salaries will increase

Next year the salary of teachers will increase by 50 %. This was announced by the Minister of education and science of Ukraine Liliya Hrynevych.