An invitation to surrender. The Tatars responded to the invitation of Pinchuk temporarily “forget about Crimea” 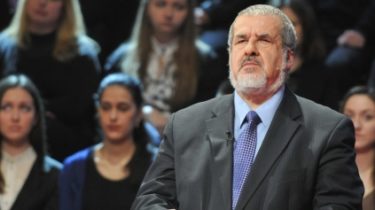 An invitation to surrender. The Tatars responded to the invitation of Pinchuk temporarily “forget about Crimea”

According to Chubarova, with the refusal to join NATO and the EU Ukraine will not exist as an independent state.

The head of the Mejlis of the Crimean Tatar people and MP Refat Chubarov reacted sharply to the proposal of the oligarch Victor Pinchuk “forget about Crimea” for 15-20 years.

The so-called “compromise” Pinchuk said call invitation to surrender all Ukrainians, including the Crimean Tatars.

“And to total surrender, samounichtozhitsya, since Pinchuk can not understand that after the surrender of the Crimea and Donbas, by refusing to join the EU and NATO, Ukraine will simply cease to exist as an independent state. So, what else has failed enemies to achieve for centuries – to destroy the Ukrainian national dignity, and to kill his faith in his gosudarstvennosti, Pinchuk invites us to exercise your hands,” he wrote.

Chubarov said that the Ukrainians were the ones “who can kill the future of his people.”

Not less sharp was the reaction of the chief editor of the Crimean Tatar channel ATR. He was generous to a strong words in the address Pinchuk. 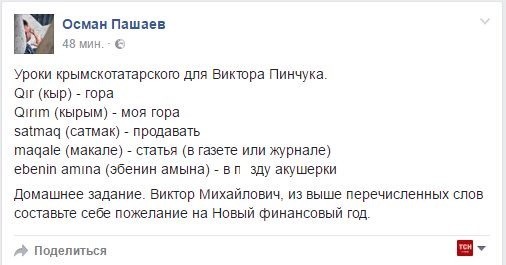 We will remind, the Ukrainian oligarch Victor Pinchuk in his article on the Wall Street Journal has offered to make “painful compromises” for peace in the Donbass. He urged in particular to consider a temporary withdrawal from the agenda the issue of accession to the European Union, temporarily unable to raise the issue of Crimea and Donbass and to forget about vtsetup to NATO in the short and medium term.