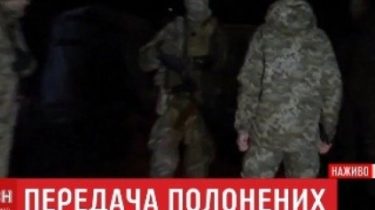 Most of the transferred has been convicted of terrorism.

The Ukrainian side unilaterally gave Donetsk the fighters of 15 people. It happened the evening of December 29 near Mayorsk. Thus, Kiev hopes to unlock the return home of Ukrainian prisoners, said in the story TSN.19.30.

Among those who gave the militants, convicted, but pardoned by the President. They were convicted of serious crimes and crimes against territorial integrity of Ukraine.

“There is espionage, there are calls to avoid the Ukrainian government and so on. They could even drive (action) ammunition, they helped the bandits, who fought against territorial integrity of Ukraine, they have participated in illegal armed groups. But they did not kill people,” – said adviser to the head of the SBU Yuriy Tandit.

Among these 15 people – six women and sick men. Therefore, it is their and gave it to the militants.

Together with them, the exchange went five relatives of Ukrainian prisoners of war. They wanted to ask fighters about the same goodwill gesture.

“The response I heard that a goodwill gesture will not. Categorically. Because it must run in the fifth and sixth paragraphs of the Minsk agreements – the exchange of prisoners “all for all”, – with tears in the eyes told one of the relatives of prisoners.

It happened in the evening near Mayorsk. Thus, Kiev hopes to unlock the return home of Ukrainian prisoners.