The rise in prices of eggs, bread, butter and milk. In Ukraine passed the food experiment 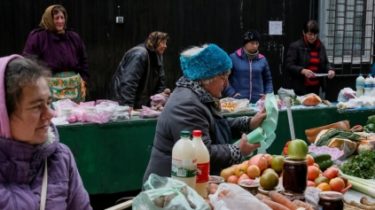 The rise in prices of eggs, bread, butter and milk. In Ukraine passed the food experiment

The government within three months did not control prices on basic foods.

In Ukraine ended food experiment: for three months the government did not intervene in price controls on basic foodstuffs.

Officials call the idea a success, because there were price fluctuations, and food producers are happy that now you do not need to pay bribes to inspectors, says the story TSN.19:30.

See also: which is cheaper: compare prices of food in supermarkets in Kiev

However, some buyers have a different opinion. In particular, Katherine complains that the prices of some products increased.

“Prices now have increased to 20-30 percent for veal including,” — said the woman.

However, if a customer is expensive for sellers — cheap. Books fundamentals of Economics this phenomenon is known as market conditions.

In these relationships the government decided not to intervene. And three months have not checked the prices for the products.

“Black bread for the first 9 months of this year increased in price by 30 cents. For the three months of the experiment at 40 cents,” — said Alexey Doroshenko, Director of the Association of suppliers of retail chains.

According to the Association, during a government experiment, the most expensive chicken eggs — by almost 40%, oil 21%, milk 18%. Before the experiment social products also rose in price, but not so fast.

“When we talk about 23 basic food products, among them 19 have risen in price, remained in place or fell 4. Here are the results of this experiment. Can we call it successful?” — said Doroshenko.

Food experiment ended in Ukraine: what the fuck

For three months did not intervene in price controls on basic foodstuffs. Officials call the idea a success, because there was no price fluctuations. Producers are happy that now you don’t have to pay bribes to inspectors.

In the agricultural Ministry official figures from the state statistics still do not have. Explain, if more expensive, the projected before the holidays. Therefore the absence of administrative intervention, the food market was not hurt.

“Any sharp price fluctuations did not happen. Dynamics the same as it was last year. And in some groups even had a reduction,” said Elena Kovaleva, Deputy Minister of agrarian policy and food.

Most experiment happy manufacturers. Now they do not need to prove the validity of the cost of their own products. This is usually done in exchange for bribes. Now the market regulates the demand and purchasing power.

“Prices are pegged to the purchasing power. If it is low, then no one can overstate just no one will buy”, — says Sergey Karpenko, Director of the Union of poultry breeders of Ukraine.

Currently, the government decides whether to continue to control prices. The final decision should be taken until the end of January.