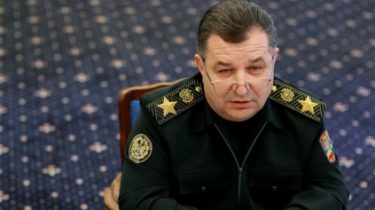 Leadership did not ensure delivery of fighters.

Defense Minister Stepan Poltorak promised to punish the military, which was awarded in Mariupol security officials had to celebrate the New year at the Mariupol airport.

Disciplinary sanctions will get seven people.

“Acquainted with the results of official investigation on the fact of improper organizing the transportation and accommodation of servicemen — participants of the celebrations in Mariupol 31 December 2016. Seven officers whose actions led to the emergence of this situation, will receive disciplinary action,” wrote Poltorak.

Earlier he expressed indignation because of the actions of the leadership of the ATO headquarters, the command of THE “Mariupol” and 54 teams who have not provided proper delivery and placement of troops, called out of units to award in Mariupol.

Because of these actions, according to media reports, security officials had to celebrate the New year at the Mariupol airport.

As previously reported, despite the holidays, the militants did not stop shelling positions of the ATO forces. Only for the last days of the Russian occupation troops 32 times fired at positions of Ukrainian armed forces.