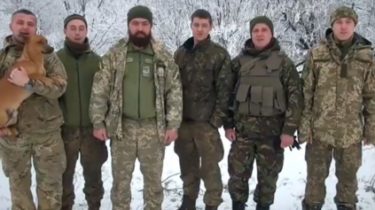 A heartbreaking video has been viewed almost 100 thousand users.

Charitable Foundation “come Back alive” published a video with warm and sincere Christmas greetings from soldiers who are defending Ukraine in the ATO area.

In the video military 81-th separate airmobile brigade and of the 72nd separate mechanized brigade of Ukrainians want peace and happiness and promise to hold the line.

See also: on Christmas Eve in the Donbas, the militants are actively “caroling” blackout attacks

“Our defenders yesterday was spent Christmas Eve far from home, to our houses reigned harmony and peace. And if Christmas is a time of dreams let’s wish that peace prevail throughout our country. The world is real. One that will bring our joint victory”, – stated in the message.

In less than a day the video was watched by nearly 100 thousand users.

As previously reported, on Christmas day, 7 January, beating the occupants from artillery and mortars on three fronts in the area of the ATO wounded three Ukrainian military. In the area of Avdeevka have been fighting. The attack repelled, the militants retreated.