Lugansk militants resumed its merciless bombardment of settlements: there are wounded 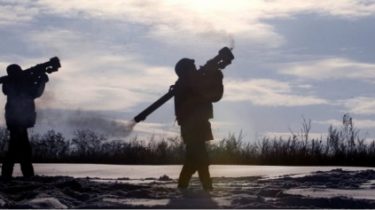 Lugansk militants resumed its merciless bombardment of settlements: there are wounded

“Lnrovtsy” continue to fire from mortars and heavy machine guns.

The militants of the terrorist organization “LNR” actively shelled villages of Lugansk region, particularly Popasna, Zolote and Novozvanovka. Due to the attacks of the Minsk agreements prohibited the 152 mm weapon was wounded three Ukrainian soldiers. This reports the press service of the police of the Luhansk region on his page in Facebook.

See also: Missing the “gray area” three soldiers were killed, the militants do not give body

“In the whole environs of the village Novozvanovka militants fired grenades 194 of “AGS-17”, 27 min. out of 120 mm and 82 mm mortars, fired from the “ANC”. As a result of one of these attacks injured soldiers from the National guard of Ukraine and Armed forces of Ukraine. The wounded admitted to hospital with gunshot and shrapnel wounds.”, – stated in the message.

Read also: Militants from a mortar hit in a five-storey building in Krasnogorovka is hurt

It is noted that fighters fired at the city Popasnaya and gold using grenade launchers, mortars and heavy artillery. From a heavy machine gun, the terrorists fired at the village of the Crimean Novogorodskogo district.

These facts are brought in the Unified register of pre-judicial investigations and qualified under article 258 “Terrorist act”.

The OSCE considered the facts of militants with heavy artillery

The UAV mission has detected the battery was shot from Novohryhorivka in the direction of Svetlodarsk. While the drone was in the air, the occupants fired at least three dozen shells. During the day the headquarters of ATO recorded 78 attacks, three soldiers were injured.