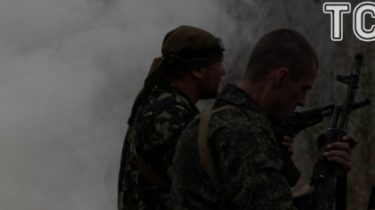 On the night of 14 January, the militants carried out two offensives, but they were repulsed.

Late in the evening on January 13 in the direction of Mariupol, the Ukrainian military repulsed two enemy attacks.

So, in the direction of the settlement Trudovsky fighters fired at positions of the Ukrainian divisions from a heavy machine gun and AGS. This is reported by the press center of staff ATO.

“Under cover of fire towards the Ukrainian military leaned out the enemy dig up to seven people, but under the pressure of the fire of our soldiers, the militants were forced to retreat. After a few minutes of Ukrainian observers found another exit DRG opponent. The command of the Ukrainian forces decided to block the saboteurs forces reserve groups, which had been fighting with a group of illegal armed formations”, — is spoken in the message.

See also: East militants firing on peaceful people to “dump” the blame on the Ukrainian side — the headquarters of ATO

As a result, one of the gunmen was seriously wounded, incompatible with life. The rest of the commandos departed in an unknown direction.

“The body of a dead insurgent was evacuated by the Ukrainian military. When it found documents proving his involvement in illegal armed formirovania”, — reported in the headquarters.

On the same day, January 13, at 21:07 in the direction of the settlement Petrovskoye were carried out DRG opponent.

“Three-minute reconnaissance of the enemy group numbering five people started shelling Ukrainian positions. After its approximation to the distance of the effective fire damage on saboteurs of the enemy opened fire from small arms,” — noted in the message.

Reconnaissance groups of the enemy withdrew towards the village of Peter after the precision fire of the Ukrainian military. The militants suffered losses.

Among the Ukrainian military casualties there.

We will remind, for the last day in the ATO zone in General militants carried out the shelling 62. A Ukrainian military wounded.