Ukraine filed a lawsuit in the Hague Tribunal against Russia – Poroshenko 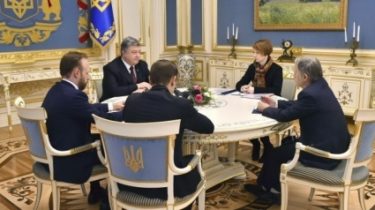 Ukraine filed a lawsuit in the Hague Tribunal against Russia – Poroshenko

Ukraine is suing Russia in the international court of justice in the Hague. Relevant instructions to the Ministry of foreign Affairs was given by the President of Ukraine Petro Poroshenko. We are talking about the violation by Russia of the UN Convention on combating financing of terrorism and the Convention on the elimination of all forms of racial discrimination.

“Three years, the Russian Federation grossly violates international law, three years conducted illegal annexation of the Crimea, the illegal occupation of the East of the country on the territory of Donetsk and Lugansk regions, implements the policies of destruction and discrimination in the Crimea”, – said Poroshenko.

He said this during a meeting with the Commissioner of the President on Affairs of the Crimean Tatar people Mustafa Dzhemilev, Deputy Minister of foreign Affairs Elena zerkal, the Deputy head of the presidential Administration Konstantin Yeliseyev and Alexey Filatov, the press service of the head of state.

Poroshenko stressed that in the last three years, the Russian militants have carried out numerous terrorist attacks which have claimed hundreds of thousands of innocent people who were forced to leave their homes. Now about 1.7 million Ukrainians are internally displaced.

“Those who remained in the Crimea and in the Donbas, are subjected to torture and persecution. Prohibited activities of the Majlis of the Crimean Tatar people and committed other crimes which cannot remain unpunished,” the President said.

Poroshenko also recalled the many crimes committed by the terrorists against the civilian population in Mariupol, Volnovakha, and Kramatorsk, as well as about the militants shot down the Malaysian aircraft flight MH-17 that killed 298 people.

Ukraine all this time acted against the armed aggression of Russia exclusively in the framework of international law, said Poroshenko. A long process of pre-trial work completed – the claim is ready for submission to the international court of justice in the Hague. This action takes place in the framework of the Convention on combating the financing of terrorism. As part of this claim held five meetings, and has directed 45 music.

The second item in the claim concerns the application of the Convention on the elimination of all forms of racial discrimination, which also held three meetings and submitted more than 20 notes.

“Today the whole complex of works for the pre-trial process is complete. Today Ukraine is completely ready to convey to the international court of justice in the Hague documents required for prosecution of the Russian Federation for it to two Conventions,” – said the President.

Poroshenko assured that he keeps control of the previous lawsuits against Russia in the framework of the claims regarding the violation of international law of the sea. Ukraine raises the question of accountability for the illegal confiscation of Ukrainian property, Ukrainian deposits, the seizure of the Ukrainian platforms, obstructions, fisheries, environmental damage and other processes that resulted in harm Ukraine requested the Crimea and occupied Donbas.

“Russia should pay a price for aggression,” said Poroshenko instructed Ukrainian diplomats to convey today, January 16, a lawsuit in the international court of justice in the Hague.

The international criminal court has not justified the hopes assigned to him, said the Russian foreign Ministry regarding the refusal of Moscow from participation in the Rome Statute. “Unfortunately, the Court did not justify the hopes assigned to him and did not do an independent, authoritative body of international justice”, – said Russian diplomats.