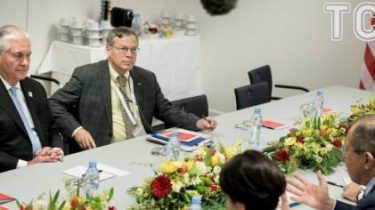 Secretary Rex Tillerson did not raise the issue of easing of US sanctions against Russia over its aggression in Ukraine, but noted the possibility of increasing pressure on Russia by results of the investigation in Congress relative to the Russian intervention in the American elections.

“We did not discuss the issue regarding changes in the status of the sanctions that were imposed against Russia as a result of its actions against Ukraine,” – said the head of foreign policy Department of the USA.

As for RF interference in the presidential elections in America and additional sanctions for it against Russia, Tillerson reminded that this question is very actively discussed in the United States, including in Congress.

“This is a serious issue, serious enough to impose additional sanctions,” said U.S. Secretary of state.

Detailed and Frank talks: Lavrov commented on the meeting with Tillerson

In turn, the Russian foreign Minister Lavrov assured that Tillerson in the negotiations has not threatened Russia with new sanctions.

Recall that the situation in Ukraine will remain an obstacle to the improvement of relations between the United States and Russia, while Moscow does not comply fully with the Minsk agreement.

This was stated by U.S. Secretary of state Rex Tillerson at a joint press conference with Minister of foreign Affairs of the Russian Federation Sergey Lavrov in Moscow.