During the day, no casualties, but two wounded militants fired from artillery and mortars. Digest ATO 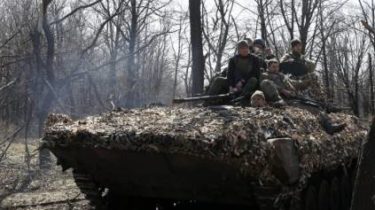 Killed on the Eastern front during the last day there. Wounded two Ukrainian soldiers, according to a story TSN.Ranok.

Despite the declared on the Eastern front, the silence, the rebels were beaten at the military positions with artillery and mortars. Was committed 65 attacks. Most of all, the enemy shelled the sector of Mariupol. There under fire almost the entire front line. From the Donetsk airport, the militants beaten in Avdeevka and Experienced.

Center fire opposition continues to be coastal areas. Thus, in the area of Water, our men, the enemy fired from a 122-mm artillery systems, mortars of caliber of 120 mm, APCS and heavy machine guns. Fighters Shyrokyne was covered with fire from 120-mm mortars, APCS, anti-aircraft installations ZU-23-2, grenade launchers and small arms. Mortars caliber 120mm and small arms, the enemy opened fire on marine pyatintsu near Hnutove. Mortars 82-mm antitank grenade launchers used in the area of Talakivka. From grenades of various systems beat on our positions near Pavlopol, Marinka and Krasnogorovka. From large-caliber machine guns tried to hit our defenders under Chermalyk, Granite and Marinka. Of small arms fired at the defenders Starognatovki. Enemy snipers were active in the area of Water, Talakovka, Pavlopol and Novotroitsk.

In the direction of Donetsk, on our positions near the Town the enemy opened fire from mortars 120-mm and 82-mm grenade launchers of various systems and heavy machine guns. Defenders of the Luhansk fired from mortars of a calibre of 82 mm. At the defencists Experienced used anti-tank missile complex, an 82-mm mortars, grenade launchers and APCS. From grenades of various systems fired at positions near Nevel. ZU-23-2, grenade launchers and machine guns of large calibers used in the area of the Heater. From small arms and machine guns of large calibre, opened fire on the defenders of the mine Butovka.

On Lugansk the direction from grenade launchers of various systems of the enemy beat on the defenders of Novoaleksandrovka and Katerinovka.

We will remind, earlier it was reported that the militants once again fired at the checkpoint “Marinka”.