Iron power: in the area of ATO held a large-scale tank exercises 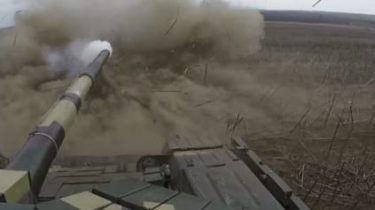 In the area of ATO held military exercises tank battalion.

This reports the press service of the defense Ministry.

During training, military work out joint actions upon the occurrence of armored mechanized units and assault groups.

“I saw upon the occurrence of joint actions of armored and mechanized units, assault groups that came in, and with the powerful firepower of the tanks was instituted mechanized units on enemy positions,” – said the Deputy commander of a tank battalion Andrey Krivoshapko.

Commanders are pleased with the exercises, noting that they were held at a high level.

“Trained at a very high level. The whole preparation squad in preparation have gained some experience. All tasks that were put on the staff made a good grade. Showed that he is indeed the team that he is really well-coordinated and, indeed, the battalion that will perform the tasks before they want to be treated”, – said the commander of crew Vladimir Kokarev.

We will remind, earlier in nikolayevshchina separate metaphony team held one of the stages of combat training and coordination, namely, the practical phase live-fire with support from army aviation.