“With a new passion”. In the Network laugh at Putin, who came to worship with Sobyanin 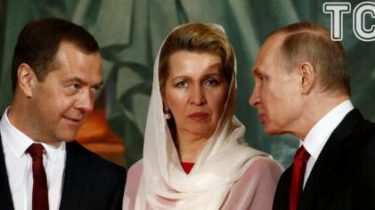 Netizens reacted to the jokes on participation in the Easter service Russian President Vladimir Putin, which took place in the Cathedral of Christ the Savior. In particular amused users, the main Russian policy came in pairs – Prime Minister Dmitry Medvedev with his wife, and Putin was accompanied by Moscow mayor Sergei Sobyanin.

The Ministry Medvedev came with his Fotini, and Putin, as usual, with his Sobyanin pic.twitter.com/brhuR6AzbG

Nick put on Sobyanin handkerchief, and called “new passion” of Putin. “Everyone has their own Photinia”, write online and say it’s not the worst choice of companion.

“Well at least not with Kadyrov came…” – write in social networks.

Also got from users Medvedev’s wife Svetlana, whom the Reuters photographer was caught with a weird expression between husband and Putin.