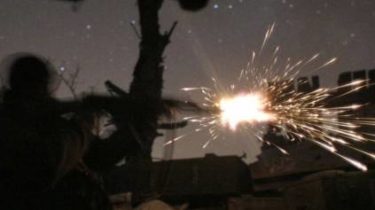 During the last day fighters 32 times opened fire on positions of Ukrainian Armed Forces Donbass. This reports the press center of staff ATO.

The epicenter of the fire of confrontations continues to be Primorskoe direction. The terrorists used 120 mm mortars and weapons, infantry fighting vehicles in Novohryhorivka, Chermalyk – 82-millimetre mortars, and in the area of Marinka heavy machine guns. Marine pyatintsu under Water shot from APCS, anti-tank grenade launchers and heavy machine guns. From grenades of various systems and small arms terrorists hit near Shirokino, Talakovka and Pavlopol. In the area of Talakivka and Water intensified snipers.

On Lugansk the direction at positions near Katerinovka militants used mortars caliber 82-mm automatic grenade launchers. From anti-tank grenade launchers fired on strong points in the area of Novoaleksandrovka.

Over the past day one Ukrainian soldier was wounded.

Earlier it was reported that on the evening of 17 April, the powerful militants fired at residential quarters of the old city of Avdiivka. One house was destroyed completely, one partially, and another six suffered significant damage: the fragments flogged the Windows and roof.