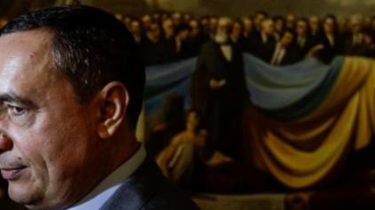 This was reported by a member of the public Council of NABOO and Avtouragan activist Alexey Gritsenko.

He argues that the document controversial policy of trying to give half, but he disappeared in the waiting room the people’s choice.

SAP won an appeal in the case.

“Half continues to implement. But he hid from service of NABOO suspicion in reception of MP Denis Jezersko”, – stated in the message Gritsenko.

“Ukrainian Pravda” said that as at 17:30 in front of the building with reception Jezersko is detective NABS, but does not comment the situation. Next to the lawyer, Martynenko Igor Cherezov, however, he came into the room, when he saw the journalist.

Recall, December 22, 2015 the Verkhovna Rada adopted the decision Martynenko on the resignation of the Deputy mandate after the scandal charges of bribery in the amount of 30 million Swiss francs.

So, journalists of the Swiss newspaper SonntagsZeitung, found that Martynenko is suspected of receiving bribes in the amount of 30 million francs, which was blocked on Bank accounts in Switzerland Hottinger. There guide financial institutions noticed a suspicious transaction and complained to the police. Later, the Prosecutor’s office of Switzerland confirmed the information on a criminal investigation in the case.