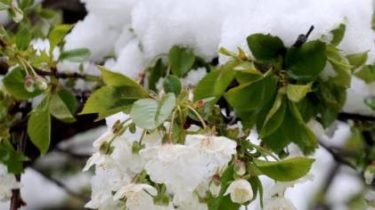 The cold snap this week with snow and frost can cause economic losses of Ukrainian producers of fruits.

As reported in the story TSN.Week, the main fruit-bearing regions of Ukraine, the Nikolaev, Odessa, Zaporozhye, Dnepropetrovsk region. However, because of the frost knotted the color of apricots, peaches, plums, sweet cherry, cherry, grapes died.

For example, at 150 trees in the village Podgorodneye wilted almost all the color. Due to the bad weather the flights are not out bees that pollinate fruit trees. The whole crop, the farmer could collect in boxes and take to the market, because a single tree provides 100 pounds of fruit. According to the estimates of farmer, 10 trees, 100 pounds is a ton. Last year the average kilogram of apricots was sold for 15 UAH. Thus, the farmer has lost at least 15 000 UAH of income.

More fortunate in Zaporizhia region, where they grow fruit. Cyclone almost gets caught on the region. Consequently, at the Institute of horticulture of national Academy of Sciences of Ukraine predicts the average and above average crop of cherries. Regarding apricots, specialists have doubts.

Surprisingly and peaches rather alive than dead, tell the gardeners. Peak flowering them next week is when the weather forecasters promise warming.

Thus in Odessa region grows 60% of Ukrainian grape. Experts are now studying the condition of the plants after the weather. The Outlook is positive as the vine is not frozen, the buds are just starting to graduate. It turns out to Odessa vineyards proximity to the sea during the freezing is salvation. In particular, due to the sea temperature is equalized. However, under the threat there were Nikolaev and Kherson vineyards. “The less good year, the more valued the wine. There are economic factors that can offset these adverse natural conditions,” – said associate Professor of the botany Department of the Odessa national University of Mechnikov Vladimir Mertsalov.

If you count the losses from the cyclone globally, according to estimates by agricultural meteorologists, they are essential. “30% of the crop – it is a natural phenomenon. The fact that Ukraine this year will lose the fruits of 30% and more, it is no longer in doubt,” – says Tatiana Adamenko, head of the Department of agrometerology the Ukrainian hydrometeorological center.

Neighboring Moldova, which is often sold in Ukraine fruits, is also covered. The country also remained a large part of the fruit. Therefore, mainly on the shelves in the summer are peaches and apricots and a little Turkish and Uzbek. But this quality is different, the price is higher.

“Fruit rush green and taken to Ukraine. Sometimes they plucked green such that there is no possibility to see the quality. If you compare with our grandmother, the more expensive fruits in two or three times,” say the Institute of horticulture.