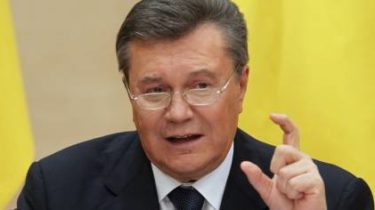 Wednesday, may 3, the Commission for control over files Interpol has stopped the investigation deprived the title of President of Ukraine Viktor Yanukovych and his son Alexander.

A spokesman for the National police of Ukraine Yaroslav trakalo was told that the Commission also ordered the Interpol General Secretariat to delete from the database of wanted Yanukovych and all information in relation to his son Alexander. Ukrainian Bureau transmits the received information, namely a copy of the decision of the Commission for control over files Interpol against Yanukovych, the Prosecutor General’s office of Ukraine as a body of pre-judicial investigation.

In addition to Yanukovych, Interpol removed from the investigation of two officials of his regime – the former head of the presidential Administration and former Secretary of the NSDC Andriy Klyuyev , and former Minister of energy and coal industry Eduard Stavitsky. 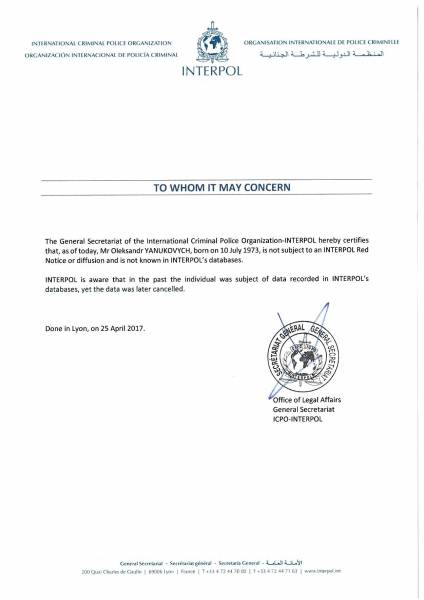 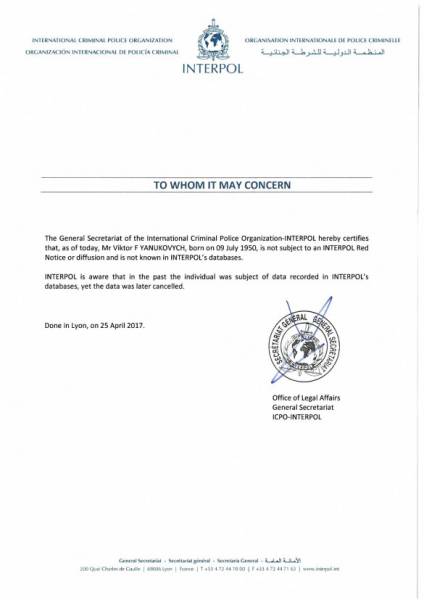 Lawyer: the Interpol has recognized the political

The lawyer ex-the Minister Stavitsky, Yuri Ivashchenko on his page in Facebook says that Interpol has recognized the case against his client political.

“Today received official confirmation from Interpol and the Commission for control over files Interpol that the complaint Eduard Stavitsky fully satisfied, his prosecution is recognized as political. The Commission took into account our arguments,” said the lawyer.

The GPU has found its explanation of the decision of Interpol

“The recent decision of Interpol on the withdrawal with an international investigation of the representatives of Yanukovych’s regime are primarily associated with the imperfection of the criminal procedural law in terms of election of a measure of restraint in form of detention. In particular, the determination of the courts to permit the detention with a view drive to the court to participate in the consideration of the petition for election measures of restraint in the form detention is not considered a determination on the content of the suspect/accused in custody. Accordingly, in accordance with the rules of Interpol, the person in respect of whom no measure of restraint in form of detention cannot be declared internationally wanted,” said ENIN.

He added that some district courts of Kiev refuse to make orders on application of measures of restraint in form of detention without the suspect.

Evgeny ENIN noted that the decision of Interpol will not affect the commencement of trial on charges of Viktor Yanukovych of treason, which will begin may 4.

Protection of Yanukovych is complaining to the wrong court

Sergei Gorbatyuk in turn assured that the decision of Interpol will be appealed, and Ukrainian legislation may make a difference. He stressed that the withdrawal from the international search Yanukovych was not due to shortcomings of the investigation or the violations by the investigative authorities.