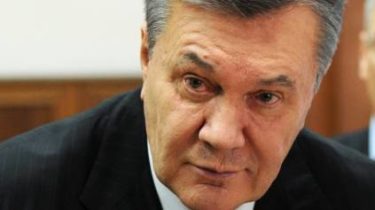 Interpol withdrew from the international search deprived the title of President Viktor Yanukovych and his henchmen because of the imperfection of the Ukrainian legislation.

About it on air of TV channel “ATR”, stated the head of the Department of special investigations of the Prosecutor General Sergei Gorbatyuk, reports UKRINFORM.

According to the Gorbatyuk, Interpol, the Commission drew attention to the part of the Ukrainian legislation, which regulates the election of a preventive measure in respect of suspects who are wanted.

“And that drawing attention to this issue, the Commission of Interpol decided to make this decision”, – said the representative of the GPU.

People’s Deputy of Ukraine and member of the parliamentary Assembly of the Council of Europe Volodymyr Ariev for its part considers that the shaft failure of Interpol to track down Yanukovych and other officials connected with the recent PACE resolution. It refers to “political signs” the use of Interpol.

“Only here for some reason to implement the resolution Interpol began not persecuted by the regimes of human rights defenders or opposition, and with thieves, and embezzlers,” wrote Ryan in Facebook.