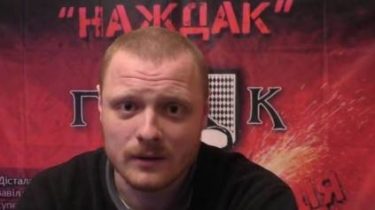 Former Prime Minister Mykola Azarov denied a statement by the head of SBU Vasily Gritsak on the financing of the Russian organization “the Committee of rescue of Ukraine” shares the suspect in the attempts to destabilize the situation in Ukraine, the leader of the group, “Emery” Nicholas Dulsky. Latest Ukrainian intelligence services call a recruited agent of the FSB, who is now hiding in Moscow, says the story TSN.19:30.

At the same time, former colleagues Dulsky refute the words of Azarov and prove that “radakovic” still in contact with the fugitive officer. “Dulsky arrived in Moscow with the aim of PR on the Russian channels. Seriously it did not take, but Azarov found a common language, as far as I know. Not only financed his Azarov – there is a Olejnik and others who give money for shares. Kolya boasted that the money he was given,” – said the founder of TH “Emery” Denis Lots.

Former friends called Dulsky a professional provocateur, but neighbors and friends – a perfectly normal guy that “hung” of some obscure wrongdoing. Whereas in the SBU doubt anti-Ukrainian activities of men do not have. “I don’t want to accuse all representatives of the “Emery”, which continue to operate in Kiev to participate in public and political life of the capital of Ukraine, I would like to say that, traditionally, intelligence agencies are now hostile to us countries use a method such as recruiting from among the Patriotic citizens of their agents. Another option is the introduction of its sources in the Patriotic environment,” said Hrytsak. And added that the transfer from Azarov Donskomu via courier 4 thousand dollars for the organization create fake rally is documented.