The shelling of the “Grad” and two of the wounded soldiers. How was the day in the area ATO 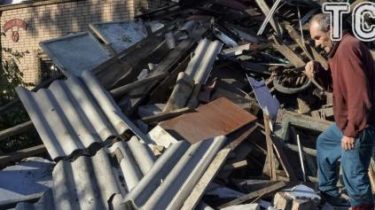 During the last day situation in the area of ATO began to deteriorate in some parts of the clashes, resulting in hostilities have been wounded two Ukrainian soldiers. This is stated in the press center of the ATO headquarters.

In the coastal areas recorded more than half of the cases of violation of silence regime from terrorists, namely 27.

“In the evening, the militants again started to bombard the fortifications of the armed forces of Ukraine artillery. In particular, the 120-mm mortars, the enemy beat on our positions in Shirokino, Carmalita and Water. Also from artillery systems of 122 mm calibre gangs fired at our strong points near Shirokino and to the North, near Marinka”, – stated in the message.

At these stations, and also near Hnutove, Lebedinsky, Pavlopol, Novotroitsk and Krasnogorovka opened fire from 82-mm mortars, rocket-propelled grenades of various modifications, small arms and APCS.

From the standpoint of “DNR” near Mariupol has left the Chechens

On Donetsk the direction recorded 17 cases of violation by fighters of the TV the ceasefire. The most tense situation remains in the suburbs of Avdiivka, where militants last night again twice beaten on the positions of Ukrainian MLRS “Grad”. The shells fell on a residential quarter on the southern outskirts of the city. Affected by the fire there, but in several private houses damaged roofs and Windows.

Enemy forces used grenade launchers and small arms in the district of Novgorod, Verhnetoretskogo and Sand. And on the Ukrainian fortifications near Nevel militants repeatedly fired from 122 mm artillery systems.

On Lugansk the direction of the illegal armed formations of heavy artillery weapons are not used. Just counted six enemy shelling of 82-mm mortars, the enemy fired on Ukrainian security forces under the Trinity. Arms of the APC, automatic easel grenade launchers and heavy machine guns the terrorists fired at the strengthening of the APU in the area of Novoaleksandrovka.

We will remind, earlier the Agency Reuters published photos of the Town after may 22, there was carried out shelling Pro-Russian militants. As a result of fire was destroyed the homes of civilians.