Scandalous construction. Shufrich and Brodsky is allowed to build LCD Rybalsky near the hem 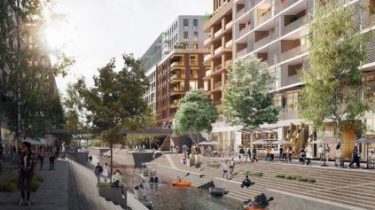 The economic court of Kiev refused to the Kiev Prosecutor’s office, which demanded to break the lease of land in the Podolsk district, where a residential complex Rybalsky.

This is reported by journalists of the program “Schemes” with reference to the register of judgments, writes Radio Liberty.

The rest of the MPs: shopping Baloga, drinking Novinsky and 4 passport Fishermen

According to the decision dated may 25, judge Victoria Sivakova has refused the claim of the Prosecutor of Kyiv, who demanded to terminate the lease of a land plot 4,5659 GA Electricians in the street, 23-b, concluded between Kyiv city Council and the public joint-stock company “Kyiv river port”.

The Prosecutor’s office in Kiev announced the need to return land to the community in late March, arguing that the land is used “Kiev river port” not on purpose. Indeed, in the terms of the lease it was about operation and maintenance of the property, but not about the construction of a residential complex.

PJSC “Kyiv river port” company of the orbit of the people’s Deputy from “Opposition bloc” Nestor Shufrych and the ex-head of state Committee Michael Brodsky, noted by the media. Director of PJSC “Kyiv river port” – the head of the Kiev regional organization “Party of free Democrats” Brodsky.

It is noted that one of the five sessions in the case of the return section of the community of Kiev was not a representative of the Department on state architectural-building control of the KSCA.

In addition, the meeting at which the decision of refusal, dated 25 may, although at the previous meeting on 16 may was made a decision on the extension of the consideration period of 15 days, i.e., a meeting was held on 1 June.