“War of two systems”: Suprun commented on the heavy vote for medical reform in Parliament 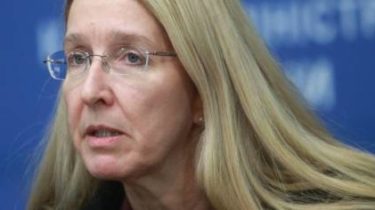 The Minister of health Suprun has called “the war of the two systems,” the struggle for medical reform in the Verkhovna Rada.

People’s deputies on 8 June very seriously adopted in the first reading the draft law No. 6327, which introduces a new system of health care. But they rejected the bill No. 6329, which will launch the new funding model.

Groisman commented on the Rada vote for madrepora

“This is a war of two systems — the old Soviet-medieval and modern European. “Forces of evil” not only want to block the start of medical reform. They want to take from the Ukrainians hope that change is possible. They want to keep the old security system of bribes that suits them,” – wrote the Minister of health.

According to Suprun, she and her team would never agree to leave in hospitals bribes. She noted that during the years of independence we developed 21 the draft law on insurance has changed more than 20 Ministers, and the Ukrainians was 10 million less.

“This is the price paid by society for the great lie that Ukraine is “free” medical care,” said Suprun and urged the Ukrainian society to give its response to the attempts of braking of reforms.

“I really want to see MPs finally began responsibly and consciously relate to decision-making. Instead populist “you kill people” or personal attacks on me or the team, sounded specific comments and suggestions”.

“We need to finally grow up. Start reading bills before they vote, to refuse bribes and to take responsibility to vote for or against, and not to miss a vote, to abstain or not to come to the meeting of the Verkhovna Rada,” said Suprun.

We will remind, the Supreme Rada of the third attempt passed the bill, which needs to run in Ukraine’s medical reform. The draft law on the state financial guarantees for providing medical services and medicines (No. 6327) in the first reading voted 227 people’s deputies. In the first reading voted for the document only 224 deputies, and the re-vote of 218 MPs.

Recently the activists demanded from the deputies to adopt a package of bills that will launch madrepora. “Every day in Ukraine kills 67 people due to the lack of effective medical system is the price we pay, delay of health care reform. All Ukraine calls for MPs – vote for life!” – said Suprun.

If the Verkhovna Rada will pass several bills that will launch the reform of medicine, starting July 1, Ukraine will have a new prestigious profession – the family doctor. This physician will receive per month from 15 to 25 thousand hryvnia.