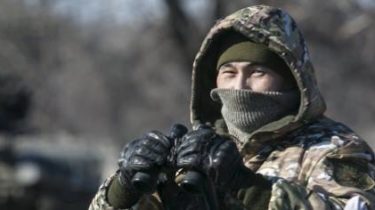 For the past day militants 55 times opened fire on strong points of the Mat along the entire front line in the Donbas: seven times the militants had used banned by the Minsk agreements, artillery systems.

The shelling of settlements. At night, around 23.00 hours, the terrorists from the occupied Gorlovka shelled residential neighborhoods of the settlement the Dry Beam. In the result of a direct artillery shell hitting a residential house on the street Youth killed 52-year-old owner of the house. On the same street damaged three houses. In the village of broken power lines, broken gas pipe and damaged vodonapornoy tower. The militants probably used gaurico guns of 152 mm caliber.

Donetsk direction. The fighters beat on defensive fortifications in close proximity to Novoluganskogo that the arc Svetlodarsk. they also made heavy shelling of ATO positions near Avdeevka, Sands, Experienced, Verhnetoretskogo, Maori, heaters and Nevel.

Yesterday as a result of shelling, three Ukrainian soldiers were injured.

Recall, according to OSCE SMM, from the beginning, in the Donbass killed 45 civilians. Another 216 of the civil during this time were injured.