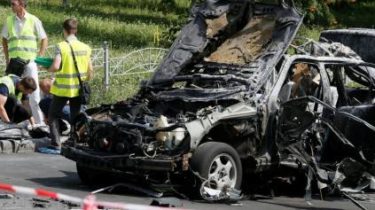 Killed in the explosion in Kiev, the GU Ministry of intelligence, Ministry of defense, Colonel Maksim Shapoval headed the Department, which is engaged in the protection of the former Russian Deputy Denis Boronenkov, who was killed in March in the center of the Ukrainian capital.

This is with reference to own sources in the defense Ministry says “UNN”.

According to the informant, the Colonel knew about protection Boronenkov, and his immediate subordinate in charge of the protection of the Russian policy.

At the same time, the Ministry of defence is not yet linked the murder of Shapoval with the murder of the former Deputy of the state Duma of the Russian Federation.

Recall, today, June 27, in the morning in Kiev, a massive explosion, during which the car was blown to pieces and the fire started. It happened near the junction of streets Solomenskaya and Mechanics in Solomenskiy district of the capital. Users of social networks suggest that Mercedes could detonate a bomb because the blast blew off even the roof of the car. Also note that the explosion was heard almost in the entire district.